What are Moxielash Magnetic Eyelashes and how dit we did our reviews?

You may be familiar with traditional lash strips. These are glued to the eyelid using a cosmetic adhesive. They can be tricky to apply, and if you don’t get them on quite right they can totally ruin your eye makeup. Magnetic eyelash strips are a similar concept – a bunch of lashes strung together on a strip. Rather than relying on glue for application, an iron-containing eyeliner is applied to the lash line like traditional liner. The lash strips have tiny magnets that will stick to the magnetic eyeliner wherever you have applied it.

Even on “makeup-free” days, I typically smudge a bit of black eyeliner into my lash line before leaving the house. With years of daily practice, I would confidently say that I have my technique down to near perfection. The MoxieLash magnetic eyeliner is a different beast. The applicator has a stiff tip which I did not expect, so my first attempt applying the liner was a bit of a mess. The consistency of the eyeliner is goopy, which makes it hard to get a clean line. I have heard others suggest applying your usual non-magnetic eyeliner first, then applying a thin line of the magnetic eyeliner close to the lash. That way you can get the clean line you’re used to, and you won’t waste any of the product trying to perfect your winged look.

Quick tip from experience: the instructions on the package say let the liner dry for 5 minutes, and they mean it! Because of the thick texture, it really does take a few minutes to completely dry. The magnets won’t work right if they’re applied to half-wet liner.

After browsing through the Moxielash website for a solid hour, I decided the WIFEY LASH was for me. I like a nice wispy look, and I wanted drama but not too much drama.

With relative ease, I attached the lashes to the magnetic eyeliner. The lashes were way longer than I had expected (12mm long at the outer edge), though that was my own fault for not starting my trial with a smaller set. The bigger problem was that the strip itself was too long for my eye, and the inner corner was poking my eyelid in an uncomfortable way. I tried to adjust them, which was easy to do thanks to the magnets, but I wasn’t able to get them to fit quite right. Wherever I placed them some part of my eye felt like it was being poked.

Frustrated but resourceful, I ended up with an internet search that showed me that you can trim these lashes. There are 5 magnets along the strip, and you just have to ensure that you trim right to the edge of a magnet. That means that the trimming isn’t totally customizable; you have to lose ¼ of the strip. I put the lashes away for a week, deciding if I wanted to gamble taking a pair of scissors to a product that had cost me around 50 CAD. I finally decided to go for it, and it was SO WORTH IT. I snipped away the outer corner (longer end) of each lash strip, and the trimmed lashes are exactly what I was hoping for. Because the inner corner doesn’t hit the inner corner of my eye, it is way easier to blend the end in with the liner. I was very pleased. 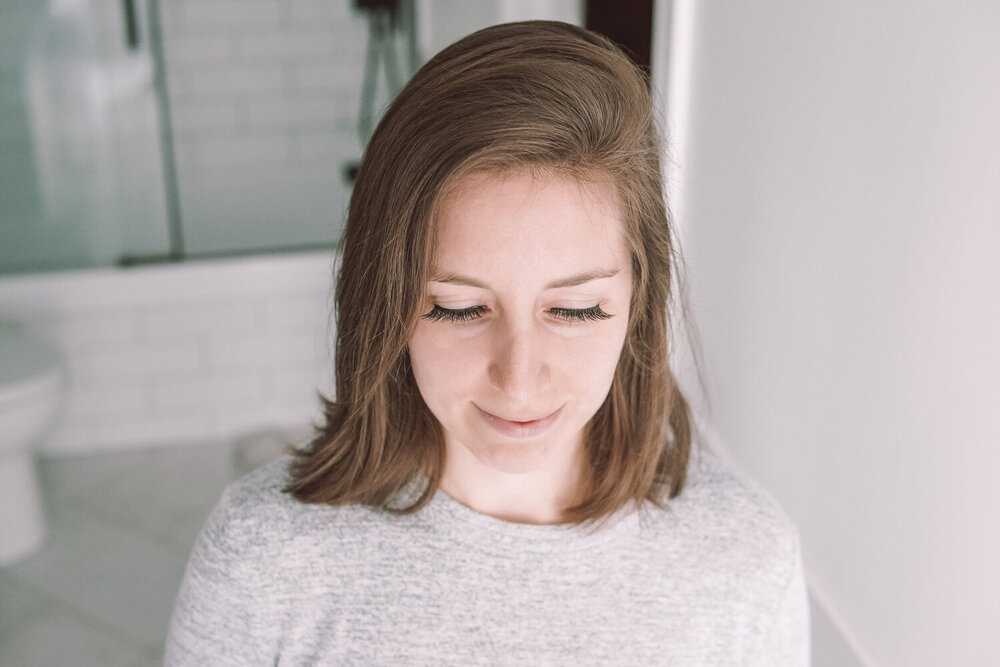 Before trimming the lash strip

When applied properly, these lashes stay put. I experimented with the amount of liner I used, and the thicker the line the better the hold (I tried a very thin line and they did dislodge during a physiotherapy appointment). The only caveat is that you can’t touch them. The liner does stick to the skin quite well, but can flake off if you aren’t careful. While you may be tempted to show your friends how the magnets work, every time you lift them you risk having some of your liner pull off your skin. The only way to get them back on is to re-apply the liner (and wait for it to dry).

As far as re-use, I have worn mine about a half dozen times and they still look perfectly new. I will report back if I change my view on this, but I can see myself using this same pair of lashes for months if I can keep them clean

The lashes are super simple to remove with a gentle* tug, and the eyeliner can be relatively easily removed with your usual oil-based makeup remover or cleanser (I use an argan oil cleanser). The eyeliner doesn’t dissolve the same way as your traditional makeup, so you may find you need a second pass at your lash line to remove any last chunks that may have gotten in between your lashes.

With use, the magnets can get caked with makeup residue, so it’s a good idea to clean them regularly as well. Eye infections aside, the magnets won’t stick as well if they’re dirty. I just use my nail to clean away the magnet, taking care to not tug the lashes as I hold them.

*Emphasis on gentle! One day I removed them quickly and ended up with an irritated spot on my lash line where the liner came off with the magnet. Ouch.

Once I got the hang of the eyeliner, I really appreciate how easy it was to apply these magnetic eyelashes. The key is really in the liner application more so than the lash application. If you don’t get the lashes on perfectly the first time, you can adjust without worrying about ruining your makeup. This makes them an amazing option for people who just can’t get the hang of lash glue.

I personally do not find they are as comfortable as traditional lash strips, but from the reviews I’ve read I am an outlier. They cost around the same for similar quality lashes, so I think the decision is really user-based here. I will keep using these, but don’t see myself buying an additional pair after they’ve run their course.